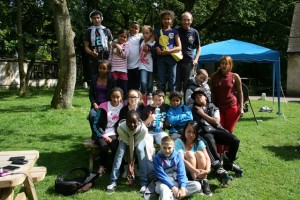 Our friend and colleague Richard MacVicar has recently died.  Known universally as Mac, he started working at Deptford Adventure Playground in 1978 – the playground is run by the London Borough of Lewisham.  He ran the playground for more than 30 years, until his retirement in August 2012.   Mac was always a great believer in the value of adventure play across the borough and during that time many, many thousands of children and young people made use of the adventure playground and all it had to offer.  He also became closely involved in the charity Noah’s Ark Children’s Venture (known to everyone in Lewisham as Macaroni Wood) and he joined the management committee, remaining as a trustee throughout all that time – a period of more than 30 years, during which he was Chair of the Trustees for at least 15 years.

The charity started as an offspring of DAP and took the official name Noah’s Ark Children’s Venture from our early meetings in the pub at the end of the high street,  although everyone calls it Macaroni Wood.

During those years Mac developed a strong link with the charity.  He loved taking groups to the woods and it is estimated that during the last 30 years he must have taken more than 1000 Deptford youngsters to the woods, probably a total of 70-80 visits.  His trips were always high octane activity based; his cooking skills might not have been up to Jamie Oliver standards but the chickens appreciated it the next morning!! He made up in other ways though – long night walks around the wood, regaling the kids with stories of Harry Nash and Psycho Lil – and the kids loved him for it!  He seldom missed a charity meeting at the Woods, of which there are always 3 or 4 every year – as well as the same number here in London.  He also came to visit at other times, more recently since his retirement, he had begun to help the project by spending time in Gloucestershire covering the Centre for staff holidays and other things such as with updating Risk Assessments.

He was also still willing to help out groups by driving our mini-bus for them on trips to the Woods.

One plan that he did however make happen was to leave part of his estate to the Woods as a lasting legacy to the project he loved and devoted so much time. This will be used annually to help pay for utility bills – always difficult to raise money for.  Mac understood the finances of the project and knew the best way he could support us was to do this.  We are enormously grateful to him for thinking of the Woods in this way.  If you would like to remember Mac and help his legacy to keep Lewisham people using the woods in the coming years, you can donate via our website at www.macaroniwood.org.uk or phone us on 01367 850356.

More than 300 people attended his funeral service at Honor Oak Crematorium with representatives from family and friends, children and adults who had been playground users, a strong contingent from The Vietnamese Community with whom he had close links and local people who had known him – a true testament to what he meant to the people of Deptford and beyond.  At a well attended wake in his favourite pub, The Dog & Bell, moving tributes were made, most especially by young people who testified to his mentoring and care, one even describing him as a “father figure” to so many young people.

We understand that a move is afoot to rename the playground in his honour – a fitting tribute; and in recognition of his huge support of the Macaroni Wood project, we are naming the recently opened sports hall “MacVicar House”.

We will all miss his help, advice and support, personality and above all, his friendship more than we can possibly express.

This website uses cookies to improve your experience while you navigate through the website. Out of these, the cookies that are categorized as necessary are stored on your browser as they are essential for the working of basic functionalities of the website. We also use third-party cookies that help us analyze and understand how you use this website. These cookies will be stored in your browser only with your consent. You also have the option to opt-out of these cookies. But opting out of some of these cookies may affect your browsing experience.
Necessary Always Enabled

Any cookies that may not be particularly necessary for the website to function and is used specifically to collect user personal data via analytics, ads, other embedded contents are termed as non-necessary cookies. It is mandatory to procure user consent prior to running these cookies on your website.